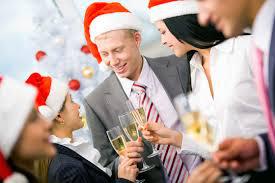 I always thought the Christmas Season was the time of year, even in business, when good will towards man would be exercised.  I remember just starting out in business when companies had holiday bonuses – just because.  They weren’t based on the company’s profit for that year.  It was more part of ‘Tis the Season type of thing.  There were Holiday parties where spouses or significant others were invited.  Parties were held at nice restaurants or a catering facility and there might even be a band with dancing.  It was a nice time of year.  A way for the Company to say ‘thank you’ to all its employees for a job well done aside from yearly increases and potential bonuses.

I feel old looking back on those days.  Its been many, many years since any Company I know has had a Christmas party where there was dancing or came with an invitation extended to spouses.  Its been a long time since any Company I know has given Christmas bonuses.  It’s just not the way it is done anymore.  Nowadays, there is an ‘in-house’ Holiday lunch that you can take back to your desk to eat.  I feel there is no more ‘Tis the Season feeling left in the business world as I know it.

I see the Holiday Season means less now than I ever have in the past.  December used to be a sacred month where virtually no one ever got laid off because it was the Holiday Season.  No Company would be so cold hearted to lay people off during such a warm and caring time; certainly not a kind and thoughtful Company.  That’s changed over the years, too.  Companies don’t care about ‘Tis the Season.  December is not a sacred time anymore and Companies do sadly lay people off at Holiday time.  No one seems to care anymore.

I can understand a Company wanting to turn a profit and having constraints of resources, but what would be so terrible that a Company couldn’t wait a couple few weeks to lay an employee off until after the New Year.  The Holidays are a very difficult time to look for work.  Hiring Managers are busy or out on vacation and the last thing on their minds is bringing people in for an interview or looking at resumes.  Terminating employees so close to year end also sends a message to the remaining work force that they don’t matter which in and of itself is not a good feeling to have in any Company – Holiday time or not.

As much as things need to get done, we need to take a minute and remember each of us are human with emotions and sometimes, especially around the Holidays, it’s not just about business, but it is about ‘Tis the Season……